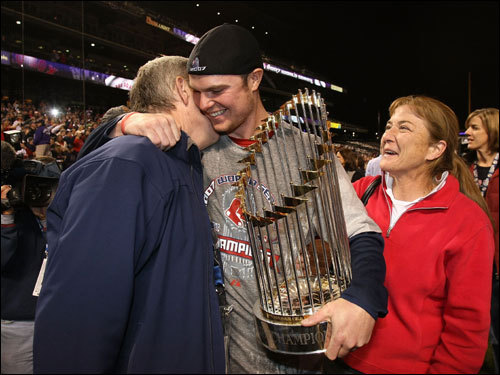 Jon Lester, celebrating with his parents after the Game 4 (and World Series) win.

Retrosheet Box Score
OTM Open Thread (Take note of sdkramer's graphics work)
OTM Game Story (I'm unsure as to why anyone would get the impression that Randy has a mancrush on Jon Lester.)

The significance of this game pretty much goes without saying. It sealed the 2nd World Series win for the Boston Red Sox in four years, and spat on numerous naysayers who would have you believe that it would have been another 86 years after 2004.

It said that this Red Sox team is here to stay; that given health, this team and this front office will be challenging for titles for the forseeable future. But it said a lot of smaller things within the game as well.

The first mini-moment I'm going to look at is the Kielty HR. How improbable and how exciting was it? Kielty appeared in one game, one at-bat, and one pitch only in the 2007 World Series. It's hard to say he didn't make the most of it. If you went for a snack during the commercial, it's safe to say it all happened so quickly that you probably missed it.

Other points of interest? Well, obviously, the final strike out with the emphatic glove toss and leap by Paps is a pretty memorable image.

Of course, we can't forget Mike Lowell, WS MVP. A 2B and a HR in this game. (Though, truth be told, I think it was that steal of 3B in Game 3 that really sealed the award for him.)

However, I have to agree with Randy in that the biggest part of this story was the performance of Jon Lester. 6 baserunners over 5 2/3 with 3 Ks isn't an immediately impressive line, but there's a little more to it than that.

It was kind of symbolic of all that he'd been through. What bigger emotional story was there in baseball, at the close of the season, than the fact that a lymphoma survivor pitched and won the clinching game of the WS on the strength of 5 2/3 shutout innings against a good offensive team?

On a more serious/baseball note, he looked much better than that final line. He never seemed out of control, as he had looked even in some of his better starts at the ML-level in 2006 and 2007. He finally looked like a confident young starter coming into his own, and pitched with as much "brass balliness" as Mike Timlin ever has. In short, (and as Randy would not be shy to tell you), this could be seen as the true jumping point on a solid-good career for a still very young LHP. Should this prove true, revising this game's ranking could well be in order.

And no more fitting is this note than today, when those of us who were wishing we'd hold onto Jon Lester may have gotten exactly what we wanted.