[editor's note, by Randy Booth] This is the first installment of a top 10 list of the best Red Sox moments from the 2007 season. No. 9 from the list will be posted on Wednesday, Jan. 23. 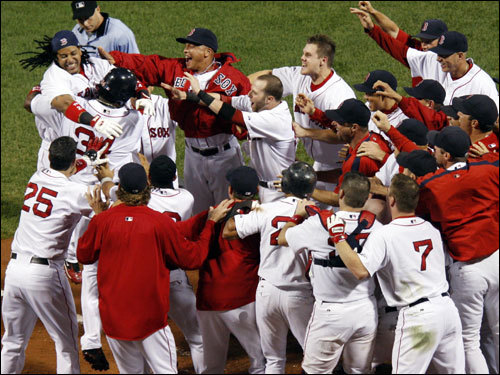 The Sox go nuts as "Being" crosses the plate.

For me, this was one of the easiest moments of the 2007 to recall, at least in terms of my own reaction.

I was working, and had been ignoring my tables most of the night in order to catch bits and pieces of the game.

Daisuke did not pitch very well: his line of 4 2/3, 7 H, 3 BB, 3 ER simply wasn't what the Sox needed on the night. His counterpart that evening, Kelvim Escobar fared little better on the whole, despite looking much better than Daisuke in the early goings.

The Sox got two early on the strength of a 1st inning 2-run J.D. Drew single. However, Daisuke gave those two right back plus another after an RBI groundout and 2 2Bs by the Halos in the top of the second.

But before we got there, we had to get through the 8th. The inning started well enough: Okajima was able to get a lineout and a K before yielding to Papelbon. Paps got Howie Kendrick to roll one to 3B. Mike Lowell's throw, strangely, was off the mark and the Angels had a baserunner with two down. Kendrick would steal 2B, then 3B. Juan Rivera walked, and was replaced by Reggie Willits, who would steal 2B himself. Papelbon finally struck out Chone Figgins on 6 pitches, and the Sox escaped the inning with no damage.

No doubt, the Sox fan in you was thinking, hey, maybe Lugo will get lucky and get HBP, DP will BB or 1B, and Papi will get a chance. At the very least, you knew it was impossible for Lugo to GIDP to lead off the inning.

Well, Lugo led off the inning with a 1B. After DP effectively "sacrificed" him over to 2B, Angels manager Mike Scioscia went to his closer, K-Rod. K-Rod came in and K'd Kevin Youkilis, still leaving Papi with an opportunity to finish off the game. Scioscia, of course, wouldn't let him.

After IBB'd Papi, K-Rod and/or Angels catcher Mike Napoli made an egregious error in pitch selection. They chose to throw Manny Ramirez a very hittable inside FB on pitch 2 of his AB, and the tension of a 3-3 tie turned into absolute pandemonium.

The home run was a no-doubter. Gone off the bat, and seemed to leave the park at twice the speed at which it travelled to Manny. As many teams had done before, the Angels paid for IBB'd David Ortiz.

I remember two occasions this season in which the Sox did something so exciting that I was unable to control myself from jumping, screaming, and otherwise making a complete nuisance of myself at work. This, of course, was one. The other? Well. That one is a little later in the list.