The Red Sox are kicking butt and taking names. Schilling, Beckett, Dice-K... it's nice to have 3 aces on one staff. They go for the sweep tonight in Toronto. Look for Wakefield to be sharp tonight---his knuckler dances in domes.

Although Dice-K stumbled a bit out of the gate this season, he's shown fantastic stuff and poise. Matsuzaka-san put it together last night allowing only 5 hits and 1 earned run in 7 innings of work for the win 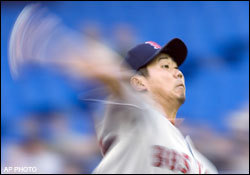 Piniero coughed up a solo tater in the 9th, but it was an otherwise quiet night for the Red Sox bullpen. Donnelly made another 1-inning appearance, and the rest of the boys had the night off.